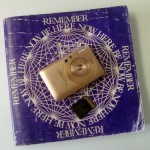 Is Digital Really So Different From Film?

Apparently not. This morning I got up early to watch the sunrise on one of the longest days of the year. I brought along my digital camera to see if I could capture some of it.

As I walked and the sun approached the horizon, I saw purple mountain-ed majesty, although there were no fruited plains; just plains with lots of buildings on them. Actually, the mountains were pink, not purple, and there was still some of this year’s magnificent snow pack visible on them. Against an aqua blue sky, it was pretty stunning. It appeared that if I could zoom in as far as the optics on my digital camera would allow, I’d be able to capture it.

I fired up the camera. It booted. A whirring sound was made as the protective iris over the lens opened, and the lens telescoped out of the body of the camera like a mechanical erection. An image appeared on the screen. I zoomed in all the way, and tinkered with the camera’s parameters until a nice image was displayed. I pressed the “take” button. A message appeared: “No Memory Card Present. Image Cannot Be Saved.”

My mind instantly took me back many decades to a moment where I had been out in the field, having carried with me a heavy bag full of Pentax cameras, a tripod, lenses, filters, and various tools for making 35mm film images. I had carefully set up the camera, composed a shot, and discovered that I had forgotten to bring film, and that none was loaded in the camera (I’d cleaned out my camera bag and “organized” everything the day before).

If you had told me about digital photography when I was a kid, I wouldn’t have believed you. Even though I was an electronics hobbyist. I took to photography at a very young age. My first cameras were of the Kodak Brownie type, taking 127 roll film, usually black and white. The cost of having it developed at the pharmacy was high, so I very quickly learned to develop the film myself. With that came the joy of the smell of chemicals, and discovering all the things that could be done with the image in the dark room by manipulating the chemical processes of developing the film, and the image printed to photographic paper. I acquired all sorts of equipment over the years, from bulk film loaders allowing me to buy film hundreds of feet at a time, to all the accouterments necessary for processing the film. Cameras, enlargers for making prints. I love to shop as much as anyone else, and I shopped hard for all that gear. I worked in various film formats, mostly black and white, from 120 roll film to 35mm to 5″ x 7″ sheet film. I used flash bulbs to illuminate subjects, and discovered the world of lighting for photography. In college I learned about acting and even makeup for film and television. I went on and shot 16mm and even some 35mm motion picture film, side stepping the low quality of 8mm. I learned how to budget film productions, and employ film crews and union workers to move around all the equipment (and take expensive breaks to ingest large amounts of catered food and drink).

All the while, electronic photography was following in my wake. Video at first. Soon, it was cheaper than film to shoot. I worked in Broadcast Television for a while, and Video was a must. The images weren’t as good as film, but the money was better (that seems to have been the story of television). Electronics progressed, and digital photography inched into practicality. In my digital vault is the evidence. Very low resolution images and video taken with devices ranging from the sublime to the ridiculously cheap.

I branched off creatively into music and writing. But technology did not wait. It gobbled up the market for images and image making to such an extent that now precious little is left of the film industry, and what little is left is in support of the rapidly diminishing market for cinema and movie prints.

So I am here now. Remembering, as Baba Ram Dass always exhorted, back in the days of Bob Fass and Steve Post at WBAI. Not that much has changed. Memory cards can be forgotten as easily as rolls of film, and images can be lost even more easily than the negatives: at the touch of a button.

[as a matter of self-aggrandizement, I’d put a link in to my own activites at WBAI, but I used another name then, just as Ram Dass was once Richard Alpert]

Is Digital Really So Different From Film?

4 thoughts on “Is Digital Really So Different From Film?”